Heroes in a Halfshell on a Coffee Mug

Last week I was talking about Teenage Mutant Ninja Turtles with some friends (don't ask me why... it just happens), I looked down at my mug cozy and thought "hey... the ties could totally be headband ties. I bet a TMNT cozy would be fun to make." I pesterd my best friend to discover that her favorite turtle is Raphael so I made my test pattern in red for her.

I posted this cozy to my Harry Potter DADA class (gotta get those points for Slytherin, you know!) and was blown away by the response so I agreed to write up the pattern. Raphael was awesome, but he wasn't quite there so brought it to work with me the next day and the TMNT fans around the office decided that his headband ties needed to wider and the eyes a bit smaller.

Last night I tried again with Michelangelo (he's my favorite!) and I'm really happy with the results. Without further ado, here is the pattern for the Mikey version. 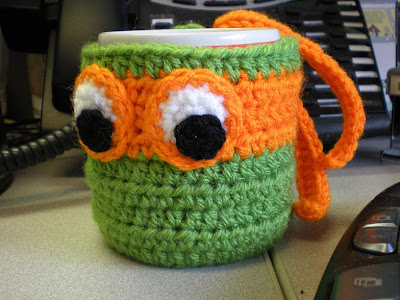 Materials:
-Worsted weight yarn in green, white, black, and orange (substitue red for Raphael, purple for Donatello, or blue for Leonardo). I used Vanna's choice for everything but the headband which I used Red Heart.
-G Hook for cozy and whites of eyes
-E Hook for pupils
-Tapestry needle

Assembly
Sew pupils to eyes using black tail from pupil.
Fold cozy in half, place one eye on orange headband to left of fold and the other eye to the right leaving a small space between. Sew eyes to headband using orange tail from eyes.
Weave in ends. 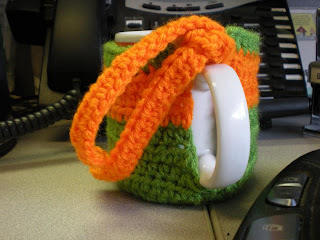